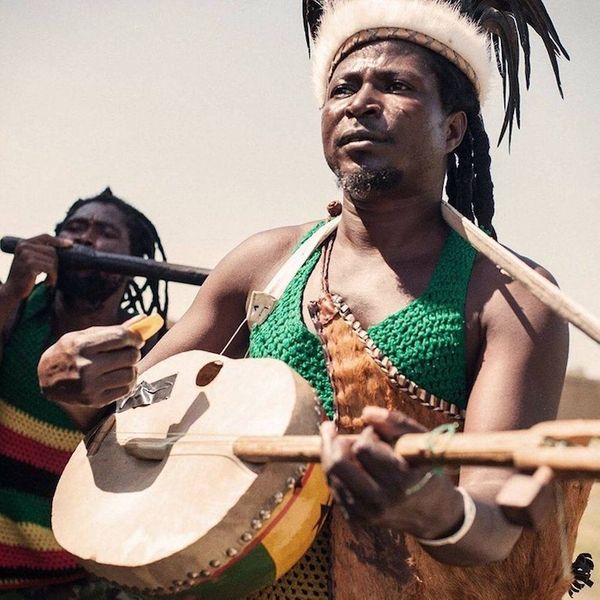 You grew up in Bongo Soe, Ghana, near Bolgatanga. Can you tell us a bit about what that was like?

Yes I was born in Bongo Soe, Northern part of Ghana. I was 3 years after I was born yet I could not walk until a man called Mossi man prophesied to my father that I should be given a traditional guitar (kologo) and I will be healed which my father did. True to his words, I could walk.

How did you get into making music?

I started playing in funerals, durbars, Pito drinking bars (pito = local drink) etc. without getting any paid. It was hectic though but I had to bare because it was my destiny. Later I gained popularity.

You moved to Accra, capital and largest city of Ghana, to pursue music. What was that like? What was the music scene like there?

Me moving to Accra it was simply tough, no accommodation, and I have to beg for food etc. Later I became a gate man in a hotel to survive where I met a man called T T who link me up to Terry Boncha. I was featured in his first album before he died. Then Arnold Pangy took over to promote me and produce my first album (I want to see you my father) and by God's grace the song make a hit in Ghana and won 4 awards in 2004. The competition was tough but hard work, determination and my unique music and my style of dressing and my instrument too is more of man power.

You’ve toured internationally fairly extensively, from the USA to Denmark. How do people in other countries react to your live performances? What do you want people to feel when you perform?

They enjoy my music so much because of my uniqueness in performance with 2 syringes of my kologo guitar and my unique dressing. I always want an inclusive and participatory performance (show).

You’ve been touring with a full band since around 2014. Who are they and how did that come about?

I formed the band which is made up of Drummers, Dancers and Backing vocals.

You’ve been called the “ambassador of Ghanaian music” to the world. What do you want to tell people about Ghana?

My vision is to set up a foundation that will unravel young artists and promote vocations like Batakari (an African garment) among others to support society.

You’ve collaborated with artists from Terry Bonchaka, the hiplife artist from Accra, to Lee “Scratch” Perry, legendary Jamaican producer, to Arnold de Boer, founding member of the legendary Amsterdam anarchopunk band The Ex, who produced your album Wicked Leaders and 1000 Can Die. How did those collaborations come to be? Are there any other artists you’d love to collaborate with?

I met the people I collaborate with during my international shows (my tours) and they like my style of music and requested me to collaborate hence we did.

I would love to collaborate with Omo Sangari from Mali, Angelique Kidjo, Alpha Blandy, Sarkodie from Ghana, Shatta Walle from Ghana, and Stone Bowy from Ghana.