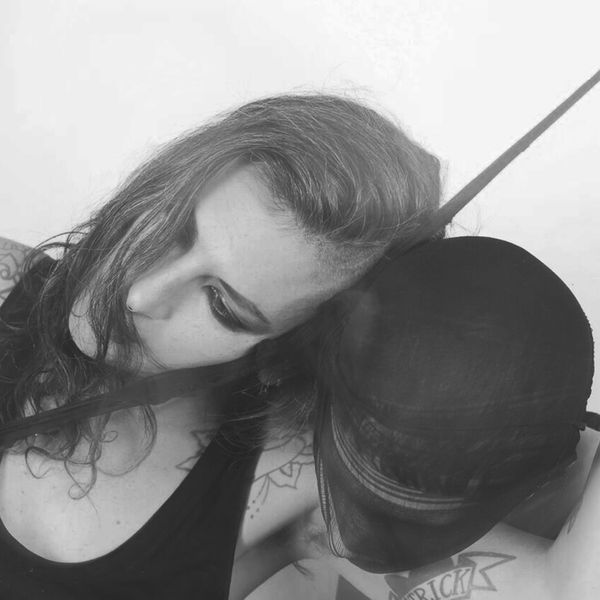 How did the two of you meet?

You both live in Chicago, which has a massive musical history—it’s everything from the home of Wax Trax! to the birthplace of house music. What is the music scene there like for you?

HIDE has a very strong aesthetic, which comes from your work as a visual artist. You’ve also collaborated with other artists, though. How was working with Nedda Afsari (a.k.a. Muted Fawn) on the Wildfire video? I’ve always really admired her work.

Nedda is so easy to collaborate and work with. I met her before we worked with her on the video as she had reached out to me about being photographed. I met photographer Kristen Cofer who also made that video with us the same way. Alison Nguyen/Menthol Pictures who added the archival footage and did the final edit is someone I met when I curated her work for a film festival. We are all good friends now, with plans to work together again whenever possible. Coming from a visual art background, I especially appreciated being able to work with these artists who all produce really powerful work.

A lot of your visual art is collage-based. Does that mode of collecting and then piecing together also inform how you write music?

Yeah definitely. All of HIDE's work is sample based. We are literally pulling from things that already exist around us and  recontextualizing them. Which is precisely the same process I employ in my collages.

You started your first serious music project in your 30s, and you’ve said it was because you felt like you needed to try new things, especially ones that scared you. Were you writing songs before that? Was it something you’d thought about or wanted to do previously, or did it come about suddenly?

Yeah I was 38 I think. It was sudden. I had never written songs before or had any interest in being in a band. I mainly wanted to get of my comfort zone and needed a more physical outlet for things that I wasn't able to express as pointedly with my visual art.

There’s a through-line about fear in a lot of what you do. You’ve said that you’re afraid of a lot of things, and the lyrics on Castration Anxiety were meant to turn the tables on that and make oppressors and abusers feel fear. I’ve seen a lot of interviews and reviews that indicate people were scared, especially by your live performances. What is the atmosphere you want to create at your shows? How do you want people to feel at them?

I fear for ALL marginalized people. This project isn't about me. It's about wanting something better for everybody who gets fucked with. I kind of think it's ridiculous that people would find HIDE's live performance scary. We aren't doing anything out of the ordinary performance wise. People who say that they thought the performance was scary to me after shows are always men, I think they don't expect or know how to process my stage presence. For example, we just did shows opening for Daughters. Alexis and I have much in common when it comes to our performances but reviews of the shows cast us in completely different light: me "writhing" "scary-sexy", him "powerful" "commanding"). Anyways, if people feel ANYTHING during our live performances that's great, but we don't really aim to create any particular atmosphere. Our songs are about human rights violations, rape, destruction of the planet, racism, sexism etc so the mood is not light. I don't talk between songs, sometimes I cry when we are playing.

As the project has grown, those live performances have become more expansive, more aggressive. You’ve said that you needed the project to give you a place to scream and take up space so that you could process your emotions. Has that feeling changed over time? Is it something different for you now than it was at the beginning?

No, unfortunately there's a never ending spring of fresh hells practically on the hour these days. If anything I'm more frustrated and disgusted with the human race than ever. HIDE still functions as a way for me to deal with that.

I don't talk about how I dress and frankly find the question really annoying at this point.

You’ve said you grew up in both Muslim and Catholic environments and that made you rebel against gender and sexuality norms, made you resent the need to define yourself, or choose one thing over another (being a mother over being in this project, for example). Do you feel like HIDE makes a space for you to break down those kinds of norms or binaries? What about for Seth?

Definitely. One hundred percent. For both of us.

Speaking of binaries, industrial is often described as a “hyper-masculine” genre. You’ve talked in interviews and on social media about your struggles with gender and how terms like “female-fronted” are stifling. Were you drawn to industrial because of that?

Misanthropy is also a concept often attached to industrial. Is there an element of misanthropy in HIDE?

Seth, you were just learning how to make electronic music when this project started, so you were both coming at this from a new place. Did you have a vision for what kind of thing you wanted to be doing, and is HIDE that?

Yeah, I was learning as we went along and enjoying the sonic liberation of making music electronically. I wouldn't say I had a vision but we both wanted to make something more aggressively physical rather than just writing some nice songs. HIDE is that collaboration, not my vision.

Are there any other bands (or visual artists) you're really excited about right now?