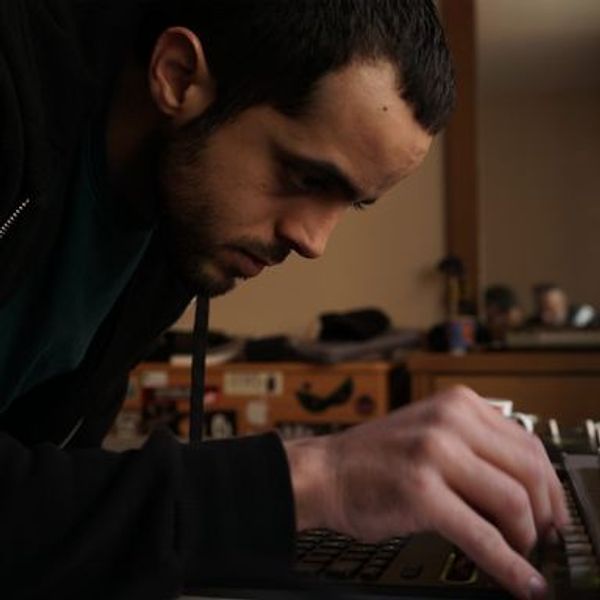 Last September, Bandcamp Daily did a feature on Drew McDowall and his top 5 recent music discoveries. Reading this article and finding out about Muqata'a and listening to his incredible album Inkanakuntu (one of our favourite releases of 2018) resulted in us inviting him to perform at this year's Suoni Per Il Popolo as well as booking 5 other shows in North America....

"This is a very, very recent discovery for me, just in the last couple of weeks. A Palestinian friend introduced me to Muqata’a’s work. He’s based in Ramallah, in the West Bank. My friend sent me a Boiler Room clip and she said, ‘I think you’ll like this!’ and I lost my mind! I was running around and going ‘Yeah yeah, I’m going to listen to it,’ and I played three seconds of it and I was like, ‘Oh, shit!’ I sat down and just watched this video of people losing their minds to this guy playing live. He identifies as hip-hop, and that’s the great thing about hip-hop or any genre now, everything is just so exploded.

Over the last couple of weeks, I’ve just been digging into his work. It’s so joyful, ecstatic, experimental, so cut-up and fragmented. His rhythmic chops are just insane; he turns the ratcheting effect on the hi-hat and turns them into these buzzing drones. Really definitely one of the most interesting things that I’ve heard in a long time."

We asked Drew to speak to Muqata'a as we thought it would be an interesting exchange. Read on...... When we played together in Amman I couldn't believe the reaction of the crowd to your set. They went mental! Is the reaction always like that?
That was a crazy night! And such an honour to perform on the same bill as you, thanks to Mayss and the assembli crew for making it happen. I can't say the reaction is always like that, but this is happening more and more as the music scene in the area is becoming like a big family.

What have you been up to since then?
Working on new tracks for an upcoming release,  and preparing some of those to incorporate in my live performance.

Can you tell me a bit about your name, what it means and how it relates to your work?
Muqata'a means boycott, but also interruption, disruption, etc. It is important to break what is considered fixed, specially when it is the systematic erasure of people.

You use a lot of field recordings in your work, can you tell me about that process?
I record sounds of situations that need to be interrupted, and always situations that I happen to be in. Then I break them up, sample them, and process the sounds to create a response. It is not always audible in the final piece, but it is a main element in leading the direction of the track.

I was fortunate to be at a talk recently by Achille Mbembe and he compared the situation in the Palestine territories to the Bantustans of Apartheid South Africa and how people who are dispossessed or disenfranchised can never cross the border because they are the border no matter where they go (I'm paraphrasing from memory). I thought of our conversation in Amman when you told me that you had leave early the next morning as it was a Saturday and the Israeli border guards close the border to the West Bank early so that they can go home and enjoy the rest of the holiday no matter the chaos and inconvenience for the thousands of people left in line. Even though that's not the worst thing that happens to Palestinians, sometimes it's the smaller harms and racisms that can illustrate the apartheid situation more effectively because it's not like they shut down the other borders or the airports early, right?
Exactly, on Fridays and Saturdays the Israeli-controlled border between Palestine and Jordan is closed at 10:30 AM, and at 9:00 PM the rest of the week, that means our time is always controlled. More importantly, Jordan is our only way out, as our old airports were stolen along with most of the country, and the airport that was built in Gaza in 1998 was bombed completely destroyed in 2001. Not to mention the wall, the military checkpoints, and the separation between the "West Bank", Gaza, and the rest of Palestine. The different colour ID cards which dictate where you are allowed to travel, and the list goes on.

What's happening in Ramallah right now musically?
There's a lot going on. There are more events happening than one can go to. DJ sets,and live performances from Hip Hop, Trap, Techno, to Noise. There are new collectives being formed and it is an exciting time for the scene here. Although each place has its own sound, the scene here can not be isolated from the bigger scene which includes other cities in Palestine like Haifa, Bethlehem, and other cities in the area like Cairo, Beirut, Amman, and others. I hope you enjoy Montreal, it's an incredible festival they have there and you have a sick bunch of North American shows after that. Have fun!
Thank you! I am really excited for it and the whole set of shows in North America! And thank you for shedding light on my work which helped in making this tour happen. Muqata'a will be playing North American dates starting June 14th through to June 22nd. All details posted on the artist's Fb page.