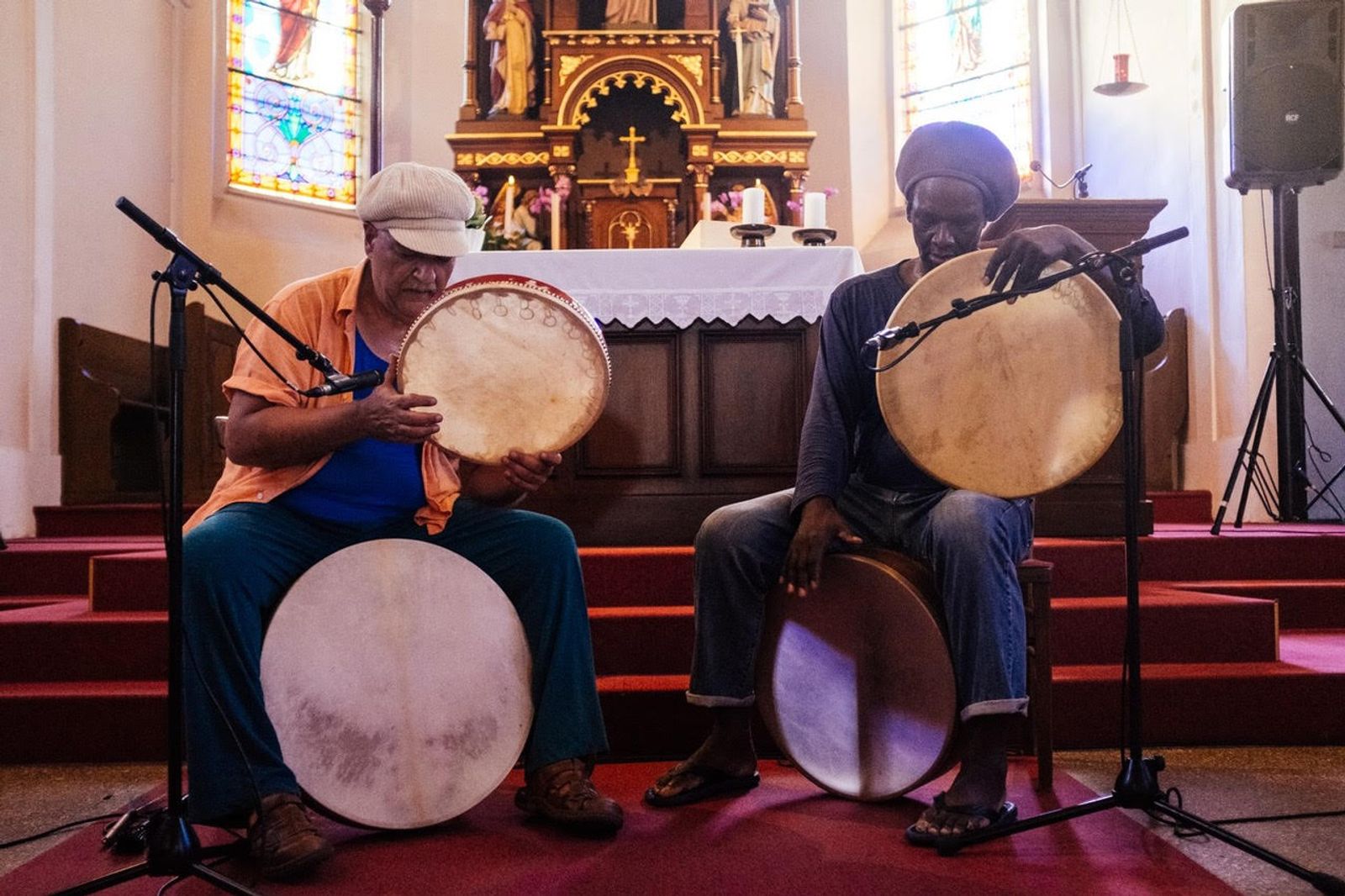 Hamid Drake - This brilliant, sensitive, endlessly rhythmic, intelligent,
spiritual, and powerful drummer /percussionist from Chicago was born in 1955 in
Monroe, Louisiana, and his family moved to Evanston, Illinois when he was a
child, just as an older musician from Monroe named Fred Anderson also moved to Evanston with his own family and started out playing with local rock and
R&B bands, which eventually brought him to the great Fred Anderson’s
attention, with whom he has worked intensively from 1974 to 2010 when Fred left us. Through workshops Fred Anderson was giving, young Hamid first got to know Douglas Ewart, George Lewis, and other members of Chicago’s Association for the Advancement of Creative Musicians (AACM). Another of the most significant percussion influences, Ed Blackwell dates from this period. Hamid’s flowing rhythmic expressions and interest in the roots of the music drew other like~minded musicians together into a performance and educational collective named the Mandingo Griot Society, which combined traditional African music and narrative with distinctly American influences appearing on the group’s first album, and has played reggae. Don Cherry, who Drake first met in 1978, was another continuing collaborator, he worked extensively with him from 1978 until Cherry’s death in 1995. After meeting Don Cherry, Hamid Drake and fellow percussionist Adam Rudolph travelled with Don to Europe, where they spent much time exploring the interior landscape of percussion, while working nonstop to share deeply in Mr. Cherry’s grasp of music’s spiritually infinite transformational possibilities. Hamid Drake studied drums extensively, including eastern and Caribbean styles, he also frequently plays without sticks, using his hands to develop subtly commanding undertones. His tabla playing is also notable for his subtlety and flair. Drake’s questing nature and his interest in Caribbean percussion led to a deep involvement with reggae. Now touring and recording all over the world, and in constant demand everywhere, Hamid Drake has played and / or recorded with Fred Anderson, Peter Brötzmann, Don Cherry, Marilyn Crispell, Pierre Dorge, Johnny Dyani, Hassan Hakmoun, Herbie Hancock, Joseph Jarman, George Lewis, bassist William Parker (in a large number of lineups), and has performed a solstice celebration with fellow Chicago percussionist Michael Zerang annually since 1991, ARchie Shepp, David Murray, Sabir Mateen, Joe McPhee, Jim Pepper, Dewey Redman, Adam Rudolph, Pharoah Sanders, Foday Musa Suso, John Tchicai, and almost all the members of the AACM. He has also maintained his ties to world music through work with Foday Musa Suso and many others. With these diverse artists, playing in a broad range of musical settings, Drake comfortably adapts to north and west African and Indian impulses as well as reggae and Latin. More and more, though he’s engaged as sideman, he’s devoting his energies and creativity as band leader and co-leader focusing on his own groups and projects such as Bindu and the Indigo Trio (with Nicole Mitchell and Harrison Bankhead), the duet with the italian vibraphone player Pasquale Mirra, as duet also with Iva Bittova, Paolo Angeli, Michel Portal.

Michael Zerang was born in Chicago, Illinois and is a first generation American
of Assyrian decent. He has been an active musician, composer, and producer
since 1976, focusing extensively on improvised music, free jazz, contemporary
composition, puppet theater, experimental theater, and international musical
forms. He has been a long-standing member of The Peter Brötzmann Chicago
Tentet, Friction Brothers, Brötzmann/ McPhee/ Kessler/ Zerang Quartet, and
Survival Unit III with Joe McPhee and Fred Lonberg-Holm. He has collaborated
extensively with contemporary theater, dance, and other multidisciplinary forms
and has received three Joseph Jefferson Awards for Original Music Composition
in Theater, in 1996, 1998, and 2000. He has over one-hundred titles in his
discography and has toured nationally and internationally to 34 countries since
1981 with and ever-widening pool of collaborators. He was the artistic director
of the Link's Hall Performance Series from 1985-1989 where he produced over 300 concerts of jazz, traditional ethnic folk music, electronic music, and other
forms of forward thinking music. He continued to produce concerts at Cafe Urbus Orbis from 1994-1996, and at his own space, The Candlestick Maker in Chicago's Albany Park neighborhood, from 2001 - 2005.  http://www.michaelzerang.com/