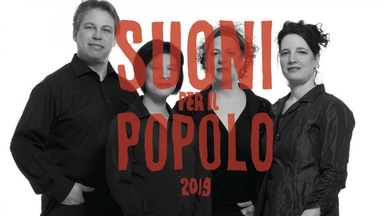 Since 1999, Quatuor Bozzini has been an original voice in new, experimental and classical music. Their skew is radically contemporary, propelling the hyper-creative Montréal scene, and beyond. Not content to parlay received wisdom, the quartet cultivates an ethos of risk-taking, and boldly venture off the beaten track. Quatuor Bozzini stands out with their “extraordinary playing” (Alex Ross, The New Yorker). With rigorous qualitative criteria, they have nurtured a vastly diverse repertoire, unbiased by the currents of fashion. This has led to over four hundred commissioned pieces, as well as close to five hundred premiered works. A Quatuor Bozzini concert is an intensely shared experience, with meticulous and sensuous attention to detail.

Created by Didier Aschour in 1996, the Dedalus Ensemble is a highly regarded, modular ensemble known for its long-term relationships with such composers as Tom Johnson, Christian Wolff, Pascale Criton, and Michael Pisaro. Collectively, the ensemble finds camaraderie in work that invites the interpreter into expanded creative roles, such as open/improvisatory elements, geometric/non-linear forms, or the total listening space that is asked of the musicians, sometimes even playing different instruments. One could say the group functions together more like a rock band, which becomes more apparent in their realizations of Moondog, but also in the striking way they interpret Music With Changing Parts (Philip Glass). Though its members come from from vastly varied and skilled musical lives, be it baroque, free-improvisation, spectralist, jazz, or minimalist, each of these unique and high-caliber individuals bring something exceptional to the group. The ensemble is not defined by a particular aesthetic, but rather by process it takes to realizing a piece of music together. They also choose to work with composers who are blurring the edges between artistic forms and hierarchical roles, and as a result become part of the collective ensemble.