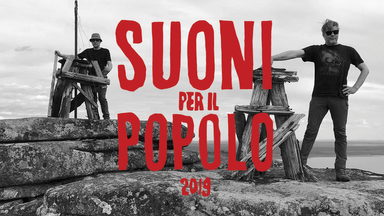 die ANGEL is an improvisational noise and electro-acoustic project founded in 1999 by Dirk Dresselhaus and Ilpo Väisänen (ex-Pan sonic). Their most recent album, Yön Magneetti Sine, was recorded in the calm of Väisänen’s cottage near Karttula, Finland. Each of the five improvised tracks echo the vibrations experienced during the white nights of summer.

Chandra Shukla (b. 1975) created XAMBUCA before performing a debut performance in Berkeley, CA on April 20, 1995 came up with the nonsensical moniker. He formed them from letters left over from a Scrabble game that spelled out what has come to be known as 'XAMBUCA'. It was this that prompted the need for a name and the beginnings of an ongoing collaborative project that was completely free of genre, form, context or musicality with a rotating arsenal of sonic guests. Though now in 2019, the lineup for XAMBUCA consists solely of Chandra Shukla (sound) and more often on the rare occasion video collaborations with Geo Lynx (video). XAMBUCA has performed internationally and continues to produce, record and perform live.

France Jobin is a sound / installation / artist, composer and curator residing in Montreal, Canada. Her audio art can be qualified as “sound-sculpture”, revealing a minimalist approach to complex sound environments where analog and digital intersect. Her installations express a parallel path, incorporating both musical and visual elements inspired by the architecture of physical spaces. Her works can be “experienced” in a variety of unconventional spaces and new technology festivals across Canada, the United States, South America, South Africa, Europe and Japan.